## I started to write this article in late summer but was finishing it slowly throughout the whole year. That means that by the time I finished it, the beginning of the article turned pretty well outdated. However, I decided to leave it that way as it nicely shows how stupidly long it takes me to write few words for you. I just put a few notes in places where appropriate.

Field season of our comparative project recently[1] reached its end this year. Well, at least its “temperate breeding” part, as I call it. Then there is still the “temperate wintering” part, which is quickly approaching, and the tropical part[2]. Just to make sure you do not think that we would be doing nothing for the rest of the year :) But after the end of “temperate breeding part”, there is a short time frame which can be used for other bird ringing activities (e.g. tapping into the fall migration) or other things. Such as holiday, maybe.

This year, using our mobile lab, we visited wide
array of habitats in order to collect data.

In this post, however, I would like to somehow summarize our “temperate breeding” field season of our comparative project. The 2018 was a bit different because our team experienced almost complete change of its members. New students appeared and quickly proved to be extremely useful helpers who very soon mastered all the techniques we use in the field as well as handling live birds. Unfortunately, this is not always the rule. Almost all the “old” members spent major part of the breeding season abroad on internships. As a consequence, I was in charge of managing our field trips this year, which proved to be sometimes challenging, sometimes frustrating[3], but mostly really fun. At least to me.

Our fieldwork started traditionally – with trapping Dippers. Even though we did not visit some of my favourite places from previous year because of various reasons (such as road bridge reconstruction works), it still was again very enjoyable experience of riding our mobile lab from one very cold stream to another, stopping by bridges and trying to figure out how to outsmart those quacking ball of feathers. That makes it a field work quite unlike the rest of what we do. 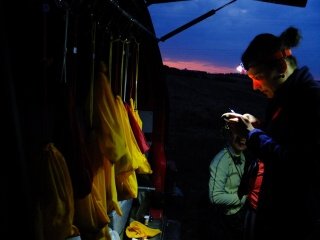 Or at least of what we did in 2017. In previous years, most of the fieldwork was done around our institute, following the same scheme – finding a nice spot, open mist-nets and wait what will be trapped. Because this is the best way how to build a solid and unbiased dataset. While we still did the same in 2018, we also travelled a little bit more and little bit further away to visit other localities such as reedbeds of various marshes and fishponds. Not only to trap marshland birds such as reed-warblers, buntings or very charismatic Bearded Reedlings, but our reedbed visits included also several evening sessions when we trapped roosting starlings. We also travelled quite a lot to trap some target species which are otherwise trapped very scarcely but would be very valuable additions to our dataset. Such species are not just the dippers, but also pipits, shrikes, river warblers or stonechats. While these trips usually produced only few birds a day, similarly as with Dippers, it was (mostly) well worth the effort. Especially shrikes are amongst my favourite birds usually inhabiting habitats where mist-netting can be quite challenging. Stonechats also share this habitat selection feature with shrikes and I will talk about trapping stonechats in separate post soon, as it deserves a few words more.

During the temperate breeding season 2018 we collected valuable data from a little more than 300 birds of 46 species. This number does not sound astonishingly large but in animal research the cliché phrase “quality above quantity” in fact means a lot. These three hundred feathered small creatures became part of a much bigger dataset which is a product of shared effort of many people and I would like to thank everyone who helped this year (actually last year) to collect data.

[2] All of them are actually long ended by this time.

[3] Especially the bureaucracy related to the foreign trips is a delicacy.