## Originally, my intention was to divide this article into two parts (but never really made it) and the first part was supposed to be published in mid-august. It should have dealt with the migration of those birds, which depart from northern temperate breeding grounds very early. It should have been followed by second part dealing with the massive migration of short-distance migrants later in the year. Well, one article is better than none, right? :)

Well, autumn… I started writing this article in mid-august. But for ornithologist from temperate regions of the northern hemisphere autumn does begin in August, or even late July. That is the time when first of the long-distance migrants begin their journey south. In Europe, these soon-departing species include mainly the Marsh Warblers, Red-backed Shrikes, Collared Flycatchers and among others the two species of nightingales. You can find such species also among the non-passerines. Perhaps the most well-known is the Common Swift, as the sudden departure of the noisy flocks of this aerial master from many bigger or smaller cities is the most noticeable sign that the northern summer turned to its second half. A half with still warm evenings, but gradually colder and colder nights and mornings. And it is a silent half, too. Most songbirds cease their singing as there is no need to attract partners – the breeding is over for a year again.

But back to the migrants. Departure of other species is less noticeable to a random observer, but to bird ringers[1] this sudden disappearance is quite evident. While some species, such as the nightingales, depart south over a longer period of time, others, like the Marsh Warblers or Collared Flycatchers, disappear very quickly. So quickly that we don’t know much about the timing of their migration in parts of their breeding range yet, and there is still something left to explore by “just” ringing birds.

Many of these species migrate during the night and it is during the night when bird ringers try to trap them. Most often with the help of the playback of their songs or calls. As well as in previous year, we aimed to trap some passing nightingales also this year. Luckily, for the quality of our sleeping, trapping nightingales on migration is much easier than e.g. with the Marsh Warblers, and one does not need to be awake whole night. Usually, we start the playback late in the evening and we open the mist nets just before sunrise. This “work schedule” works for nightingales just fine, as most of the birds are trapped after sunrise anyway, and only a minority at night. During these late summer sessions, we were quite successful in trapping not only nightingales, but also several individuals of other species we aimed to – the Common Redstart and some very late Collared Flycatchers. As a nice bonus, there were very often some River Warblers caught in the early morning, too.

However, if one has the time to do it, late summer “whole-night” trapping is a very nice experience – enjoying the starry night full of mysterious sounds[2]. And then, after spending the night with exhausting but very rewarding work, the beautiful sunrise comes and makes even the stoniest hearts warm up a bit. And one does not need to focus only on passerines. Late summer is the time when waders fly south in mass numbers and you can see quite some exotic species also in inland habitats, far away from the more typical sea coast. But trapping these elegant birds of the far north is very often much more physically exhausting then trapping passerines. To trap waders, usually, one has to put on waders and dive knee-deep into smelly dark mud aided only with the headtorch, surrounded by clouds of bloodsucking mosquitoes. But seeing a snipe, ruff or a sandpiper up close is worth the effort.

When the summer ends, and the time most people actually call autumn comes, that’s when the summer long-distance migrants are slowly replaced by the short-distance migrants. And that is also the time that most people think about when they hear about autumn bird migration. Because, some of these migrants are much more obvious to observers than the nocturnally migrating warblers of August night. Such as the V-shaped flocks of geese or starlings waiting in huge numbers on power lines, resting for a short time, before continuing south again. But this is also the time when tits and finches start their journey south. And because these birds prefer to move south during the daylight hours, at convenient places, one can witness the miracle of migration in real time. One such great place is the Červenohorské mountain pass, that we visited this year (as well as last year ) again.

Three of the robins wainting to be
released to continue further south.

There, the birds are channelled through quite narrow mountain pass and fly very low. When the weather is favourable and migration is strong, one can see thousands of birds flying by every hour. The view is spectacular. There, one can really appreciate the extent of this natural phenomena. But to me, the most favourite migrant is a nocturnal one, anyway. One that is very well known to most Europeans. It is the European Robin. To me, it is the symbol of autumnal migration, even though it is not that easily observed as the tits or finches. But robins indeed migrate in huge numbers to the southern Europe and at this time of the year it is the most common bird in the mist nets during the night at the Červenohorské mountain pass. During good nights, tens of thousands Robin probably fly through this pass. 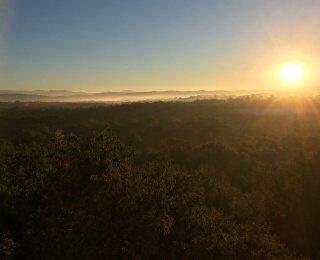 Wintering habitat of the European Robin.

This charismatic little chat is not a ubiquitous bird during the winter in Czech Republic, even though it regularly winters here (but does so in lower numbers). Therefore, when I visited south-eastern France last autumn, I was amazed by the number of Robins that were singing and calling from every single shrub around the hotel we were staying at. Robins from all over Europe.

I hope you enjoyed this rather long review of our autumn migration ringing season. Of course, I did not mention many of the ringing field trips we did, because I either forgot to do so or not to lengthen this post even more. I will just briefly mention the we performed two more trips to trap migrating starlings on their nocturnal roost as this is something, I really enjoyed a lot. I hope our next year will be as fruitful as the last one.

[1] And I believe also to birdwatchers which go out birding in this otherwise “non-birding” period.

[2] Apart from those played from the playback speakers.