Robins and Chats by Peter Clement and Chris Rose – review

The Robins and Chats authored by Peter Clement and Chris Rose published by Christopher Helm in 2015 (ISBN: 9780713639636) is part of the “new” series of Helm ID guides which apart from colour plates contains also some colour photographs of birds, colour maps and in some cases also spectrograms of bird songs (this is not the case of Robins and Chats, though) and more importantly much more information compared to the “old” ones[1].

As a book, Robins and Chats is a bigger one. Not a book one would carry to the field, for sure, but that is something that was not intended anyway. As other books of the series it is divided into several sections. After short introduction dealing with the genera covered, morphology and behaviour and a “how to use this book” section comes very nice shortish, yet informative, chapter on phylogeny of the Muscicapidae written by Per Alström. After the introduction come the colour plates and then the main text itself. Finally, there are the pretty long list of cited literature and index.

As the name of the book suggests, the book covers members of the family Muscicapidae, the so-called Old-World Flycatchers and Chats (list of genera covered at the end of this text). The list of covered species is quite impressive – 175 species. Not all members of Muscicapide are covered, though. The book deals only with the subfamilies Saxicolinae and Erithacinae (i.e. Cossyphinae), but not with all species as e.g. Ficedula flycatchers are absent from the book (members of Saxicolinae). Also, Muscicapinae subfamily is omitted, but again not without exception – Alethe is included. The mixture of genera chosen is therefore best described by the title of the book as robins and chats… and wheatears and redstarts and related and unrelated species. Quite surprisingly, included are also the cochoas and Sialia bluebirds which authors themselves admit are better treated as members of the family of thrushes, the Turdidae. The taxonomy used is quite modern (considering the date of publication), yet authors did choose some conservative treatments from time to time (e.g. the Common Stonechat as a single species – Saxicola torquata). 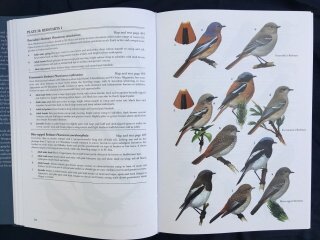 The book contains 62 colour plates beautifully illustrated by Chris Rose (website ). There is really very little to say other than that they are outstanding. Chris Rose is one of the most talented wildlife artists I know, and I admire his work very much. His name is also one of the reasons I was looking forward to buying this book. As far as I can say, the birds depicted are therefore very accurate regarding colour and “shape”, not always well achieved by other artists. I have only a very small comment on the illustrations of nightingales and alethes. The nightingales seem to me to be too bulky and upright as the animals, as I know them, are a bit slimmer and more elegant[2]. The juveniles of Fire-crested Alethe and Brown-chested Alethe are depicted as being quite different one from each other. Truth is, that separation of them on appearance alone is a very difficult, if not impossible, task (photos of both species including the troubling juveniles will be available in gallery soon). But these are only minor comments and the plates are superb in general. They show the birds in many different plumages – male and female plumage is usually depicted (if different) as well as many juveniles. Seasonal and regional variability is also illustrated. Each illustration is labelled with a different letter, as it is standard in Helm guides, but the order of illustrations on a plate can be sometimes a bit chaotic and one must check which species and what plumage is looking at.

However great the plates are, the main part of this book is the next section, the species accounts. Each genus is introduced with a paragraph describing common features of its species. Each species account is divided into several sections, first dealing with field identification including similar species and description of voice, behaviour and habitats the bird inhabits. After that, there are usually several notes describing the birds breeding and its status and distribution including nicely arranged and informative distributional maps. For migratory species, their movements are then discussed, in species with well-known migratory behaviour, this information is quite detailed. This is followed by a very detailed physical description of birds, including sex and age differences as well as juvenile plumages and geographical variation. At the very end of each account a short note on taxonomy is given and measurements of either live birds or museum skins. While the Field identification really serve mainly bird watchers for quickly identifying the species in the field, the Description and Moult sections will be of extreme usefulness to bird ringers[3] because of their detail. Only very little-known tropical species lack this detail as they are much less studied than the temperate (and “European” in particular) species.

Sample pages from the book.

There are some inaccuracies also in this part of the book. For example, there is not a single mention of the “paradoxus” morph of the Black Redstart in the book. Or the fact that males of Bluethroat of the subspecies cyanecula can have the otherwise white feathers, forming the iconic throat spot, tipped rufous which can be misleading when observing the bird from a distance. This is only briefly mentioned as a possibility in winter plumage. But even males in summer plumage can exhibit the rufous spot making them look like the svecica subspecies. I can understand this approach in a field guide where identification “at any cost” is the aim, but in a book meant as a reference, which you probably do not take in the field anyway, I would expect to deal also with these potentially confounding plumages. Another comment would be addressed to sometimes erroneous descriptions of selected photos. Authors carefully describe each bird (if possible) as in 1st winter/summer plumage or adult birds, yet there are several mistakes in the book for at least five very common and well described species such as the Common and Black Redstarts, Northern Wheatear or European Robin where 1st winter/summer plumage is erroneously labelled as adult or vice versa in several cases. That is even more surprising if you consider the detailed and accurate information provided in the text on ageing these species.

From the text above, one may get the impression that the book is full of errors and not worth reading. But the opposite is the truth. It is much easier to point out errors or inaccuracies. If I would just say, that the book is superb (which it is), one could think that I’ve might not even read the book. But I think that now it is time to say, that the book actually is superb and most, if not all, above mentioned comments are just the smallest ripples, hardly even noticeable, on an otherwise mirror-like beautiful glacier lake. If you consider the tremendous amount of work spent on this book, its coverage and detail, then authors would have to be inhuman robots not to make some small mistake. This is just great book.

[1] “Old” and “new” is not strictly separated but an example of an “old” guide is e.g. the Finches and Sparrows by Peter Clement, Alan Harris and John Davies.

[2] Truth is that when alarmed, nightingales acquire such posture, and maybe they can be encountered in the field in such way more often than I assume.

[3] As well as to anyone identifying the bird from photographs or museum skins, of course.